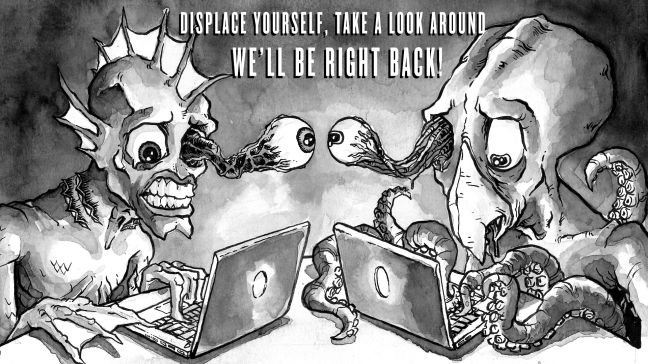 This illustration by Michael Bracco appeared on screens on every break between panels during the Displacements conference livestream.

A little more than one year ago, the Society for Cultural Anthropology (SCA), in conjunction with the Society for Visual Anthropology, held its biennial conference. Called “Displacements” (#displace18), it was a hybrid undertaking, one composed of a virtual conference and in-person gatherings at sites across the world linked via the internet. In addition, it was an experiment—one aimed at radically reducing the ecological footprint associated with academic conferences and re-thinking what takes place within the conference itself.

Anchored by a dedicated website operating out of Johns Hopkins University in Baltimore, Maryland (USA), the April 19-21, 2018 gathering involved 150 individual presenters and more than 1,300 participants from over 40 countries, more than half from outside the United States. (Previous, in-person SCA gatherings typically had about 200 attendees, the vast majority of them from the United States.) The scores of local “nodes” from which participants accessed the conference ranged from Amsterdam, Quetzaltenango, Quito, and Seattle to Dakar, Jakarta, Tangier, and Toronto. (Many also accessed Displacements from their homes.) Moreover, the conference included a film festival.

#Displace18 succeeded on many levels, most notably by drastically cutting the CO2 emissions of the conference while greatly democratizing participation. (Conference registration was only US$10.) That said, there were also limitations and challenges associated with the new format—from the technical to the social and personal.

As many followers of FlyingLess often inquire about different “models” of virtual conferences, we bring to your attention a valuable essay, “Reflections on #displace 18,” authored by Anand Pandian, the lead conference organizer. The essay, one partially informed by surveys of Displacements participants, explores the successes and challenges of the 2018 meeting, while providing a helpful overview of the conference.

At the end of the essay, Pandian puts forth a number of “lessons” and “future possibilities”—both for those involved in Displacements and for others who are thinking of organizing similar endeavors. Among them is the great potential for better exploiting the node structure so that nodes become central actors in the overall conference—by serving as sources of conference material, for example—rather than simply tools of distribution. Another is the need for Displacements and similar undertakings to figure out how to negotiate the potential for distraction among conference participants. Because the format allows for virtual attendance, it also facilitates multitasking by attendees, thus raising challenges in regards to depth of engagement.

The effort to think through such matters is a manifestation of the Society for Cultural Anthropology’s intention to do another Displacements-like conference in 2020. Indeed, work on the next biennial conference is already underway.

Meanwhile, anthropologists are pushing the American Anthropological Association (AAA) to allow for virtual alternatives to in-person participation at its annual meetings. For the upcoming meeting in Vancouver (in November), Anand Pandian and some fellow anthropologists proposed an “Executive Session”—a status granted to panels seen as most relevant to the conference theme—on the carbon impact of conferencing and low-impact alternatives. The proposal quoted the AAA’s Global Climate Change Task Force’s final report (one approved by the organization’s Executive Board in December 2014). “Reshaping the relationship between people and their carbon-intensive lifeways entails a shift in habitus,” the report asserted, while recommending that the AAA “aggressively” pursue “developments . . . that reduce the carbon footprint due to association-wide activities.”

Such language notwithstanding, and even though the conference theme is “Changing Climates: Struggle, Collaboration, and Justice,” the AAA declined to include the panel among its high-profile sessions.

Despite the rejection, the organizers behind the proposal hope that the would-be roundtable discussion—one envisioned as a combination of in-person conversation for those physically present and of a series of video presentations available on social media—will be part of the regular conference program. Regardless, one can be sure that the energy generated by #displace18, along with a growing reality and awareness of climate breakdown, will only lead to intensified efforts to push the AAA and related associations in a low-CO2-emissions direction.